Eli to Ben: ‘Can you believe it’s been 10 years already?’

Home/News/Eli to Ben: ‘Can you believe it’s been 10 years already?’
Previous Next

Eli to Ben: ‘Can you believe it’s been 10 years already?’

From William Perlman at the New Jersey Star-Ledger this morning: 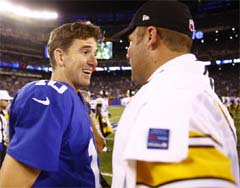 As the players gathered at the 50-yard line after the Giants’ 20-16 win in the preseason game against the Pittsburgh Steelers Saturday night, Giants quarterback Eli Manning met up with Steelers quarterback Ben Roethlisberger, and the two spoke at length and exchanged pleasantries.

“Can you believe it’s been 10 years already?” Manning asked Roethlisberger.

The two smiled and wished each other a good season. 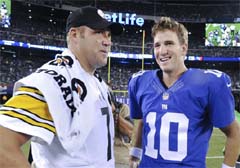 Ben played only one series, a seven-play, 70-yard drive that ended in a Shaun Suisham field goal to give the Steelers a 3-0 lead. He was 1 for 2, with a 46-yard completion to rookie running back Dri Archer.

“I thought it was a good, solid first series,” Ben said. “Obviously, it helped that we had a huge play to Dri. But we moved the ball down the field and got points on the board.”

Bruce Gradkowski replaced Ben in the first quarter. He went 8 for 12 for 66 yards.

Second-year quarterback Landry Jones was 11-of-21 for 74 yards.

Although the Steelers ultimately lost to the Giants 20-16, Coach Tomlin took some positives away from the game.

“We had an opportunity to grow. We learned some things about some people. We’ll just take this as part of the process and move forward as a team.”


You can see photos from the game here.


*The game will be re-played on NFL Network today at 12 noon.