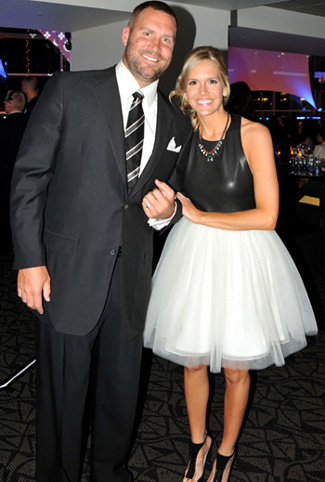 Players and their families modeled fashions from American Eagle Outfitters, NIKE, Moda Pittsburgh, Michael Kors, Robert Graham, Nordstrom and Kiya Tomlin, who has her own custom couture designs and had an extensive line in this year’s show.

Tomlin had designed dresses for the show in the past, many with the Steelers logo on them. This year’s show was labeled Steelers Nation Black & Gold Style, and while the logo might not have been there, the team colors were.

The show started off with a bang, with the University of Pittsburgh dance team and cheerleaders and the Pittsburgh Steeline setting the stage and firing up the crowd. It was then all about the players as they hit the runway, many with their kids, in their jerseys dancing and having fun to their own musical selections. Among the choices were Ben Roethlisberger and his son Ben to “Just the Two of Us,” by Will Smith, Shaun Suisham to his country’s National Anthem “O Canada,” and Bruce Gradkowski and daughter Liliana to the Temptations “My Girl.”

The show came to an amazing end with the Suit & Tie scene, as rookies worked the runway styled by Tuxedo Junction, and the veterans, many accompanied by their families, wearing their own personal custom designs.


You can read more from Ms. Varley here!