“He won last week. That’s how he’s measured and that’s how I’m measured, and that is what we tend to focus on.” — Coach Tomlin, when asked to evaluate Ben’s performance with the injury. 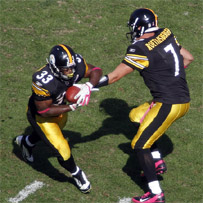 The Steelers hope the running game will be able to take some of the pressure off quarterback Ben Roethlisberger, who continues to deal with a painful left ankle sprain that’s limited his effectiveness recently.

Though Roethlisberger passed the ball 40 times against Cleveland and was sacked twice Tomlin believes the ankle is “certainly no worse” while adding he’s “not concerned about (Roethlisberger’s) overall physical state” though the quarterback may be limited in practice during the week.


You can read more from Coach Tomlin’s meeting with the media here.

“Offensive Player of the Year: Ben Roethlisberger, Steelers quarterback. He carried the Steelers’ offense and he did it through pain. Roethlisberger sprained his foot (which required a metal plate in his shoe), broke his right thumb and then suffered a high-ankle sprain. He was still able to lead the division with 4,077 yards passing, 21 touchdowns and a 63.2 completion rate. Roethlisberger threw five touchdowns against Tennessee, out-dueled Tom Brady and beat Cleveland in the first meeting on one leg.”

Antonio Brown got the nod (or rather Mr. Hensley’s nod) for Breakout Player of the Year.


You can read the rest of Mr. Hensley’s blog here.

John Elway on Ben, during his Live Podcast today –

“Anytime you look at the Steelers, Ben Roethlisberger is a big part of their offense. He’s a guy that’s a big guy, that’s a competitor. A guy that really makes a lot of plays, so we’ve got our hands full with him just because of the way he plays the game and his toughness. I’m not sure how many guys would still be playing with the ankle that he had. He went the next week even though people say that he probably shouldn’t have gone, but that just shows you how tough a guy he is and what a competitor he is. You know you’re going to have your hands full anytime you go against Ben.”


You can listen to the Podcast here.

What was the front page story in the Sports section of the New York Times the last time the Steelers played the Broncos in the playoffs? 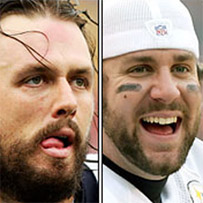 The playoff beards of Big Ben and Jake Plummer of course:

The first sign of stubble – if not trouble – came without notice on an unremarkable day months ago, when neither Jake Plummer nor Ben Roethlisberger shaved.

Countless days and whiskers later, it has come to this: a championship game featuring quarterbacks whose mugs look more at home in a saloon than a salon, a face-off of facial hair, where ZZ Top might be logical halftime entertainment.

The beards of Plummer and Roethlisberger mostly speak for themselves. They are not artsy, wispy things. They are not the shadowy five-day stubble favored by celebrities aiming to look simultaneously cool and incognito. They are not as manicured as a suburban lawn, like the goatee or the patch.

Taking a look back:

“I might never win the passing title or be the league MVP. But I’m OK with that. I just want to win championships. I’ve got a lot of fingers left for rings and I want to win a lot more championships. When I’m done and they look back on my career, I want them to be able to say he won the big games. That will mean more to me than anything.” — Ben, from an interview with Ron Cook, Pittsburgh Post-Gazette, January 14th.