Today, Ben announced the first grant of the 2013-14 season from the Ben Roethlisberger Foundation at The Giving Back Fund. The Foundation will be distributing a grant to the Bellbrook Fire Department northeast of Cincinnati, OH where the Steelers will play the Bengals on Monday, September 16th. 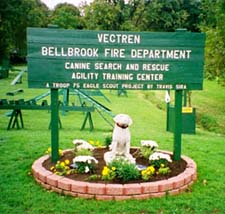 The grant funds will benefit not only the Bellbrook Fire Department’s four K-9 teams, but will also assist with updating the aging Vectren Bellbrook Fire Department Search and Rescue Canine Agility Site, managed by the organization, Ohio Disaster Search Dogs. In the past 10 years, the site has hosted K-9 teams from across the nation to provide integral training and practice.

During the 2013-14 NFL season, the Ben Roethlisberger Foundation will be distributing grants to K-9 units of police and fire departments in the cities and surrounding communities of each regular season away game for the Steelers. The Foundation will also distribute several grants to the Pittsburgh area and will consider a grant to a non-NFL market city in the United States for each playoff game in which the Steelers compete. Ben’s Foundation invited police and fire departments across the country to submit proposals detailing their needs.