“It’s week one. We lost a game in week one. Yeah, we didn’t play very well at all on offense, but there’s no time to panic right now. The AFC north is all even. Everyone is atop the lead. We’ll see how it all irons out after this week. I think the Browns and Ravens play. There will be someone at the top at the end of this.” — Ben 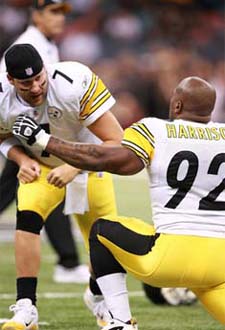 Will it be weird to look at James Harrison on the other side of the line of scrimmage?

Yeah, it’s already different watching film and seeing him in a different uniform. I’m sure he’ll have his black visor on so we won’t be able to see his face too well.


Do the Bengals use Harrison similarly to how you used him?

They’re a different defense, so no.


How long does it take to adjust to a new center?

It is going to take some time. We’ll get as much work in as we can. We were off to the side today in between periods trying to work on the silent count, different snaps and things. I think if we get good work in this week we’ll be just fine.


Do you expect to see some time with Fernando Velasco as well?

Honestly, I don’t know. It’s up to Coach Tomlin to see how fast he can progress as a natural center. We’ll see how fast they want to move him along.


Are there any adjustments you have to make in terms of making the calls when Beachum is in there?

Nope. He knows his stuff, and he’ll be just fine.


Ref: What happened Sunday now that are you are removed from it:

The best part about being removed from it is that we can put it behind us. Obviously, we didn’t make enough plays. We didn’t play well enough, and just didn’t get it done, point blank.