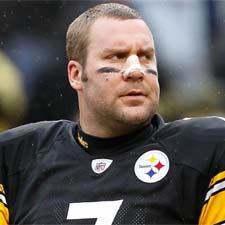 Q: Is it open season on quarterbacks?

Ben: It’s always open season on me (laughs). It’s part of the job, part of the position. We can’t always protect ourselves. We’re exposed a lot when we go to throw the ball, that’s just kind of the way things are sometimes.


Q: Could you see yourself playing with a broken rib and a punctured lung (during discussion of Cowboys quarterback Tony Romo)?

Ben: Yes. Yes I could. I played in a Super Bowl with a fractured rib. It is what it is, you just got to tough it out sometimes.


Q: Is that the mentality of a starting quarterback?


You can listen to full interview here.

Ben did an interview this morning with WPXI‘s Bill Phillips which can be seen on Sunday at 6:00 pm during the Steelers vs Colts Pre-Game Show.

This weekend’s match-up: Steelers vs. Colts 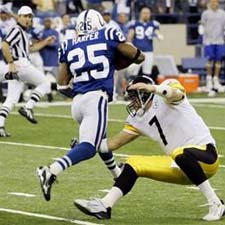 The Steelers are 13-6 in their all-time regular-season series with the Colts, though Indianapolis has won each of the last two non-playoff encounters between the teams.

The Steelers have never lost to the Colts in five postseason matchups, including a 21-18 road stunner over top-seeded Indy in a 2005 AFC Divisional Playoff.

Pittsburgh’s calling card may be on defense, but the team is doubly difficult to overtake when quarterback Ben Roethlisberger is on top of his game.

Provided Roethlisberger has adequate time to survey the field, he should be able to dissect an Indianapolis defense that’s allowed opposing quarterbacks to complete nearly 70 percent of their throws, though the secondary is adept at limiting big plays. He’ll be tested, however, by the prowess of edge rushers Robert Mathis (4 tackles, 1 sack) and Dwight Freeney (2 tackles, 1 sacks), two of the game’s top pressure producers who’ve combined for over 20 sacks in each of the last three seasons.


You can read more on the match-up and the series history here.

You can take a “Look Back” at the 2005 AFC Divisional Playoff Game with Scott Brown here.

“Being married and being in a great place in my life, it’s a great thing. Being in touch with my faith, even more, and family and friends, I’ve really enjoyed this offseason and obviously getting married, and I’m looking forward to things to come.” — Ben, during a conference call with a Colts beat writer for the Indianapolis Star.