“My department received a grant from your foundation during the last NFL season to purchase a new K9 for our department. I was chosen to be assigned to the K-9 unit and be the dog’s handler. Let me start off by saying that I am extremely grateful and can not describe in words how thankful I am that our department was chosen for this grant.

K9 ‘Ajax’ and I will be completing our first training school (Narcotics Scent Detection) in approximately two weeks. Then in September we will be starting “Patrol School” together. K9 has always been a goal and a dream of mine and because of your foundation I was able to achieve it. Once again, thank you very much for your generosity and for choosing our department.” — Officer John G. Reuter, Fort Lee (NJ) Police Department, in an email to the website on March 27, 2014. 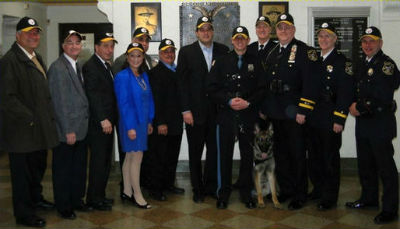 A police dog funded through the Ben Roethlisberger Foundation hit the streets after graduating from an 11-week program teaching the German Shepherd to sniff out drugs, officials announced this week.

The borough’s two K-9 teams will work varying shifts, allowing up to 16 hours of service a day, the chief added. The dogs will be available seven days a week.

The dog teams are a boon to public safety, responding to crimes in progress and missing persons calls, according to Bendul.

The department’s newest K-9 team was made possible through a $6,500 grant from Roethlisberger, the Pittsburgh Steelers quarterback, the chief said. Seized assets helped pay for the K-9 patrol car and gear, with no cost to taxpayers.


*Again, thank you to the Fort Lee Police Department and Officer Reuter for keeping us up-to-date on K9 Ajax!