Did you miss Ben’s show today on Cook & Poni this morning? 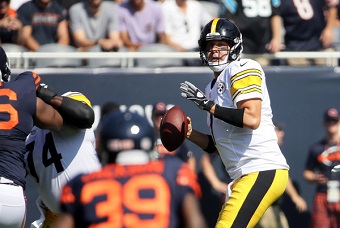 Following Sunday’s loss to the Bears and Monday’s press conference where he explained his teams actions regarding the National Anthem, quarterback Ben Roethlisberger joined The Cook and Poni Show for The #1 Cochran Ben Roethlisberger Show.

Ben opened his show restating that “in no way, shape or form were we trying to protest, boycott anything that has to do with the National Anthem.”

Ben said to him, what he wants to achieve with the teams actions, is showing that they are one.

“I wanted to also show support for my brothers, my teammates. I wanted to be out there locking arms to show that we are one, we are united together, black, white, Hispanic, Tongan, Samoan whatever we have, we’ve got so many different ethnicities on our team, we all come from different backgrounds, religious beliefs, all that stuff, and to me, it’s about uniting this country and standing together, arm in arm, brother to brother.”

Ben was asked if the amount of time they spent talking about what they would do and then executing it during the National Anthem distracted the team and hurt their focus during the actual game.

“I do,” Ben told us. “I’ll never make excuses, I have to play better, if I play better we win the football game I think. It was definitely on a lot of our minds, a lot of our hearts, dealing with everything we dealt with the night before, being up later than usual, the distractions, whatever it is, but we still have to step on the field to play football. At the end of the day, we need to go out and be better football players than we were on Sunday.”

Things wrapped up on Ben’s show with him telling us that he’s “not really sure” that the teams plans are set for what they’ll do during the National Anthem next week, but the team is “98-percent sure” at this point.

“I think it’s prudent to just make sure that, throughout the week that we’re all on the same page and I’ll talk with Cam [Heyward], talk with some of the veteran guys, the lineman, just to make sure that we’re all still good, that nothing’s changed. I guess you never really know what could happen in the next week in terms of social media, comments made by people, whatever it may be that could change the attitude a little bit, but I think we’re pretty set in what we’re going to do, I think we may finalize to make sure we are on the same page and know exactly so we look uniform and look united.


You can listen to his full show here.