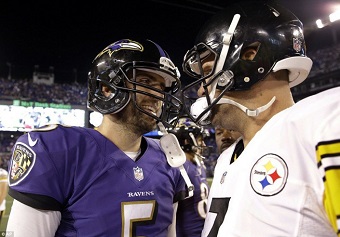 And it’s not going to be in a friendly environment whatsoever.

The Ravens have won the last four games in Baltimore, the last Steelers win at M&T Bank Stadium coming on December 2, 2012, a 23-20 victory.

And when the two teams meet in Baltimore on Sunday, Ben Roethlisberger knows it will once again be a tough place to play, against a tough opponent.

“It’s a tough environment,” said Roethlisberger. “The crowd is loud and they really feed off that silent count. They can really get off the snap of the ball and create some issues, get you behind the chains, force you to pass it, and then throw some different blitzes at you. Their rushers and coverage guys just create a lot of tough situations for you.”

It’s a rivalry that has stood the test of time. Players have come and players have gone, but the attitude has remained the same. And it’s an attitude those who are new to the rivalry will quickly understand.

“This game is crazy. It’s a special game,” said Roethlisberger. “I am still here. (Terrell) Suggs is still over there. We’ve got a lot of respect for each other in this rivalry. We have enough guys here that have played this physical AFC North game here or there, playoff guys. I don’t think it will take long, if the young guys don’t know now what it will be about.”

“They’re a very good defense,” said Roethlisberger. “Eight interceptions, 10 turnovers in three games. That is unheard of. Suggs is still him. He is still getting after it. A lot of respect for him doing it this long. C.J. (Mosley) has taken the role of Ray Lewis in the middle directing that defense. The secondary, they spent a lot of money on it and they are playing like they spent a lot of money on it. Whether a ball is tipped in the air, they always seem to find it or if they just step in front of a pass. They know how to play the pass well. The jump all over you.

“This defense is opportunistic. They create a lot of turnovers, interceptions especially, but we still need to come out and run the ball and almost force run it at times.”

One of the key factors for Roethlisberger and company is not just get out to a quick start, but play consistent throughout.

“It seems like when we play this game, whether it’s here or there, one side always starts hot,” said Roethlisberger. “Whether we go down and score the opening series and can’t do anything after that, or visa-versa. We have to make sure we don’t get frustrated with any part of the offense, passing or running, and stay with it. If you dig yourself a big enough hole you kind of have to be creative. We need to stay true to our game plan and hope that we score last.”