“Huge game, huge. This is one of the best teams in the NFL right now, plus they’re in our division plus it’s in our house. This is a game that we kind of need to see what we’re made of, offensively, defensively, special teams…It’s because it’s a team that’s playing with a lot of confidence, a lot of belief in each other, and they are one of the elites in this league, so this will be a good test for us.” — Ben, on just how big a game this weekend’s matchup with the Bengals is.

Ben joined the Cook & Poni Show this morning for his weekly Q&A: 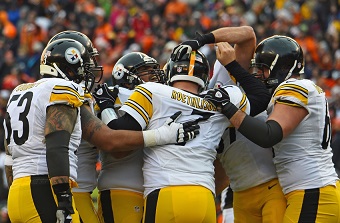 The Steelers are coming off a 23-13 loss at Kansas City in which 3rd string Quarterback Landry Jones made his NFL debut but this week all eyes are on Ben who may make his return from a knee injury that has sidelined him for the past 4 games.

When asked if he’ll play Sunday, Ben said “I’m not sure yet. I’m gonna give it everything I have on Wednesday in practice, and then it’s going to be coach’s decision. So we’ll go into practice with the mentality that I’m going to go and be ready to go, but my body is going to tell me probably better than anything.”

Roethlisberger was then pushed further and asked if he thinks he’ll play.

There was talk that Ben would play last week against the Kansas City Chiefs, but he revealed he suffered somewhat of a setback during the week that held him out.

“I felt good in practice, but then Thursday night it just didn’t feel real good, it kind of ached on me a little bit, didn’t sleep a lot,” Roethlisberger said. “It was a little discouraging, but I guess that’s part of the rehab process.”

With it looking more and more like Ben will play this week against the Bengals, he was asked what he has been doing to get ready to play Sunday.

“Monday we have a team run, so we went out and ran, just kind of a jog. And then some rehab stuff on it, lifting and everything because you don’t want to take too many days off of it, so I did that. Today will be more of a rest day, ready to go as full as I can tomorrow.”

If Ben is able to get back on the field this week, it will be the first time this season the teams has all of its playmakers on the field at once, and that isn’t lost on the quarterback.

“We’ve been excited about getting everybody back out there…You see what the potential is when they’re all out there together.”

If he gets on the field, Ben will certainly want to protect his knee and responded to what his teammate Ramon Foster said about teams targeting players injuries and if he’s worried about that happening to him.

“I think maybe,” Roethlisberger told us. “I guess that’s weird to say, maybe yes and no. I think that defenses and other teams are very aware of injuries. I know that when we’re playing against a certain defender and we know, say a defensive back has an ankle injury, we don’t necessarily target him to say ‘Ok, how can we hurt him?’ but we know that maybe he can’t cut as well or can’t run as well. So maybe some players do aim for injuries, I would hope that people would respect the game and the players enough that they wouldn’t do that, but I guess you never know.”