Ben spoke to the media after practice today –


“I think Heath Miller should be president. Forget the Pro Bowl. He’s president. I’m starting a campaign today! I’m going to be his campaign manager. He’s the best ever!” — Ben.

Highlights, including more on Heath Miller: 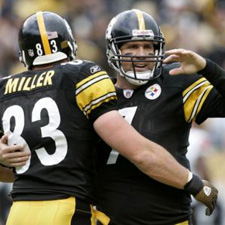 On whether he looks specifically for Heath down field –

I’ve always looked for him. He’s a comfort zone, a security blanket. He’s a great player. He’s a great teammate, maybe the best teammate I’ve ever played with on any level. That’s a high compliment, but he deserves it. He makes plays. You get down to the goal line, like that touchdown he caught – he catches it, gets hit by a bunch of guys but he holds on…you gotta enjoy throwing to a guy like that.

Yeah! (smiles) That’s how you know he’s ‘feeling it’. When he is in the moment, he flexes. You never see emotion from him. I think we saw it for the first time this year in Oakland. He caught the touchdown and looked right at their fans and flexed. That’s awesome. It’s fun and gets you going, because he doesn’t show emotion. When he does, you know it’s time to go.


On whether he has seen film or highlights on Redskins rookie quarterback Robert Griffin, III –

How do you not see highlights? He’s putting up a great rookie year so far, great numbers, doing some really good things. They have a very unique offense around him the way that they run pistols and wishbones…all kinds of different formations. Our defense is going to have their hands full, but I’ll take our defense against anyone!


On the Redskins defensive secondary –

It’s good. I came into this league with DeAngelo Hall so I know what he’s all about and what he can do. They’re a very confusing defense. They like to throw a lot of different looks at you. I guess it’s good that I play every day against our Steelers defense because they do a lot of the same stuff. It’s going to be a big challenge for us offensively.

You can watch video of Ben’s full interview here.

You can read the transcribed interview here.

You can check out an article by the AP’s Will Graves on Ben and Heath here.

You can keep up with Heath’s career and community work here.