Have you ever wondered what the “story” is behind that pregame hug between Big Ben and James Harrison that’s become it’s own tradition?

Ben explained the origin in his second sit-down interview with the Steelers’ Missi Matthews:

“Boy, I didn’t know it was so well known. It started after one of the very early games, maybe the first or second game [of the season], he sent me a text of a picture of us hugging, saying, ‘Look how cool this is?’ in the tunnel before we went out. With a guy like James, and shoot – myself, you never know when it’s going to be your last game, your last season. 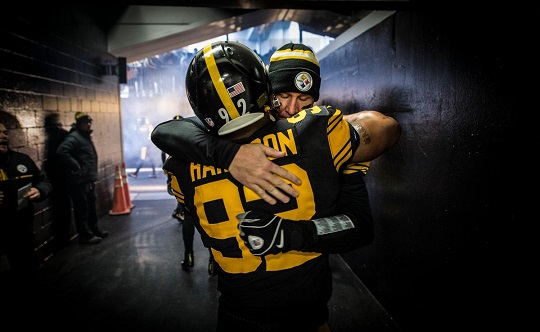 “I remember texting our team photographer, and saying, ‘Hey, if you’re around, could you get a picture of this before every game. Just thought it would be a neat kinda collage of this season that we feel is special. It kinda turned into a tradition. I’m hoping at the end of this thing, we can put together a nice little collage of two brothers that I think respect each other, respect the game that each other play, and just have love for each other before we go on the field just telling each other, ‘We love you brother, go get it.’ Hopefully, it turns into something really special.”