After learning about this story through another fan, and then contacting Ernest Freeman personally, we are posting it with his permission:


“I’m humbled and very much appreciative of you doing so as well. Ben is my favorite player and I’d be honored. This has been unintended and overwhelming to say the least.” — Ernest. 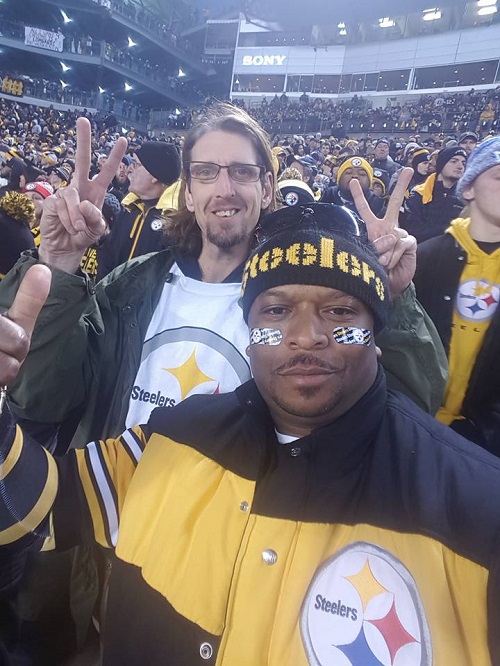 I had an extra ticket for the game tonight. I was originally going to sell it until I listened to the song, “Give Love on Christmas Day” by Johnny Gill. In the song there’s a line about giving love to the ‘man on the street’ which gave me an idea. Instead of selling the ticket, I invited ‘a man on the street’ to the game.

This is Ricky aka “Stretch” as he’s known on the streets of Pittsburgh. He’s 43 years old and has been in the Burgh his entire life, but had never been to a game. He and his friends on the street look out for one another, so one of friends was able to take his backpack and other belongings until the game was over. He told me he’s lost 12 friends this year to heroine overdoses and a few other tough stories.

I offered to buy him anything he wanted during the game, but he never once asked for anything, nor did he accept any offers of food or money after the game. He told me the gift of being invited inside the stadium to watch the game was the best Christmas gift ever for him. The looks on his face during the game looking around the stadium was something I’ll never forget because it reminded me of my own blessings. It also reminded me of what this day is all about in that the ability to give is a blessing in itself.

Initially, I wasn’t going to post about this but then I remembered the many, many, many blessed people I know in life, and saw this as a way to remind us all to give, give back and/or make a difference when and where we can.


God bless you Ernest. Imagine a world with more people like you in it! Thank you so much for allowing us to share your beautiful story.

*Thank you to Misty Mills for alerting us to this story!!