Home/News/Thoughts and Prayers…
Previous Next

to Steelers Running Backs coach Kirby Wilson and his family! 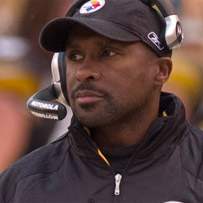 Coach Wilson suffered serious injuries during an early-morning fire at his home. He is currently being treated at UPMC Mercy Hospital in Pittsburgh.

Coach Wilson has been with the Steelers organization since 2007. He has 23 years of coaching experience at both the collegiate and professional levels, including two seasons with the Arizona Cardinals (2004-06) and two seasons with the Tampa Bay Buccaneers (2002-03) – both as a running backs coach.


Please go to Steelers.com to read their statement on Coach Wilson.