Tuesday: Ben’s Q&A with the media

Home/News/Tuesday: Ben’s Q&A with the media
Previous Next

Tuesday: Ben’s Q&A with the media

Every game does because we’re trying to get that one win. I’m going to tell you guys that I’m just going to keep answering the same way. We’re just trying to get one win. That’s all that matters. — On whether he thinks this game has a playoff do-or-die feel to it.

Ben spoke today about the rivalry with the Ravens, the absense of Ray Lewis and Ed Reed, the performance of Kelvin Beachum, and more. 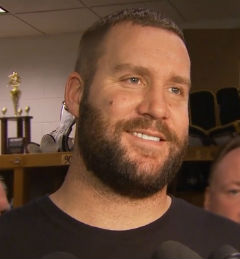 Do you have a favorite moment of this rivalry, or something that sticks out?

There are a lot of them. Some of them are painful. Some are good memories, some obviously are bad. There have been a lot of great games between these two teams.


How is the Ravens defense different without Ray Lewis and Ed Reed?

Well, they’re obviously younger. They’ve got some young guys doing some really good things, but they still have [Terrell Suggs] and Elvis [Dumervil] over there. They still have some guys that can wreak some havoc and this is going to be another week and another tough test for us.


If you had to pinpoint one thing, what has helped you avoid the sacks the last couple weeks?

Gosh, I don’t know if it’s one thing. The line has been doing a great job of blocking. When we do the no-huddle, the ball can get out a little bit quicker because it uses shorter passes if I see things, or I check to a run. If you told me one thing, I’d say the play of the line. I thought they’ve been doing great.


Baltimore is a sack-driven defense. Do you feel you guys are in good position to handle that?

I hope so. It’s the guys up front, me, the receivers, tight ends – it’s on all of us. Sacks, I know it goes to the line, but it’s not on them. It’s on me as much as them, and running backs picking up blitzes, wide receivers seeing hots and sights. It’s going to be a big test, especially being on the road where it’s loud and they’re rowdy, they’ve got the field turf – it’s going to be a tough test for us.


Have you been surprised by the play of Kelvin Beachum?

He’s done a great job. If I said he surprised me, then I would’ve said my expectations for him were low. He’s been playing well. He’s been playing to the level of expectations for me and a lot of people. Last week in the Cleveland game they brought a corner blitz and he popped right out and picked it up like it was nothing. Just really proud of the work that he’s put in both on and off the field because he’s a very cerebral player as well.


A while back, you were one of the few who sounded words of caution about the rookie quarterback class from last year and a lot of those guys have struggled. What did you see or why did you see it that way?

I just think that the media is so quick to put these guys on pedestals, and it’s hard, it’s hard work being a quarterback in this league. It’s nothing against them. I just always want those guys to – I wish that people would back off giving them so much hype because it’s hard. Once you can prove it a couple years in the league, then you should start getting that stuff. Defensive coordinators are so good and defenses are so good that they’re going to figure you out eventually. You’ve got guys upstairs like Coach [Dick] LeBeau and you’re going to tell me a one-year guy is going to be able outwit Coach LeBeau and be better than him? It’s nothing against those guys, it’s just the level of expectation that is put on them early.

I think the game of football is a chess match between coordinators. We’re just pawns playing it and trying to do what they tell us to do. That’s why the no-huddle is effective, in my opinion, because I’m calling things as I see them out there, whereas offensive coordinators call off of tendency and off of what they think is going to happen. Same thing for a defense, and obviously audibles can happen and things. But it’s not easy being the coordinator and we just, as players, try and go out and execute to the best of our abilities.


You’ve been a part of hot streaks in the past. Does this feel like one?


With defenses knowing you’re going to be in the no-huddle, do you find them to trying to disguise things a little more?

A little bit. When you get veteran crafty guys – last week D’Qwell Jackson, who’s been in the league a long time, their Mike linebacker, he was kind of sitting back at times not calling a defense and knowing that I was calling some dummy stuff. Just mixing up dummy signals and dummy calls so that they don’t wait or they can declare early. But you get a guy like that who is a veteran guy that knows what’s going on, then they’re going to sit back and try to play the chess game. It goes from coordinator chess game to usually Mike linebacker-quarterback chess game.


Baltimore has a few of those guys.

They do, and the crazy thing about it is one of their best ones is probably Suggs. I don’t think he’s calling their defense, but he’s been around, he hears calls and he’s a smart player. He’s a guy that I’ll have to be alert for trying to listen in on the calls.


Is Le’Veon Bell getting better every week?

In all ways, honestly. He’s a guy that is communicating back there next to me. I’m not having to [ask] him every time a play is called, “Do you know what you have?” I’m fully comfortable that he knows what he’s got. Even to the point where he’s getting a little too comfortable at times where he’s telling me how much time is on the play clock and things like that. [Laughs] I have to tell him, “I see it. Don’t worry about it bud.” But that is just the awareness that he has and you see the growth and the maturation. I think it’s great. I think it’s good for him.


You can watch video or read more from Ben’s interview here.