“Now is the time to go out and play our best football. If you are a great team, you have to win on the road. We’d like to get it together, starting next week. We have not been able to put it all together yet this year, whether because of injury, weather, a lot of factors.” — Ben, on his play and that of the banged-up offense. 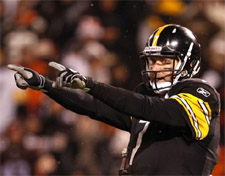 Ben completed 23-of-40 passes for 221 yards (improving to 14-1 in his career against the Browns) while playing the entire game with a “healing” high ankle sprain for the Steelers (12-4), who were the AFC’s No. 5 seed due to Baltimore’s win over Cincinnati this afternoon.

Isaac Redman provided the go-ahead score with a 7-yard scoring run in the third quarter.

Redman replaced the injured Rashard Mendenhall who hurt his right knee on the final play of the first quarter.


You can check out video highlights of the game here.  Photos here.


“I’d give myself a C-minus. So would you call that below average? Or is that average? I don’t know, I wasn’t very good at school.” — Ben.

To Hines Ward (1,000 career receptions), Heath Miller (passing the great Lynn Swann for #4 all time in receptions), Antonio Brown (first player ever to have 1000+ yards both receiving and returning), and of course Ben (his second career 4,000-yard passing season)!


“Well, we knew that play was coming and I had a bunch of options and it was kind of one option. Just get it to Hines. Unfortunately he had to lose yards, but it’s still such an awesome honor and I feel privileged to play with the guy.” — Ben, on Hines Ward’s 1,000th reception.