Keep the votes going for Ben and his teammates to play in the 2012 NFL Pro Bowl!! 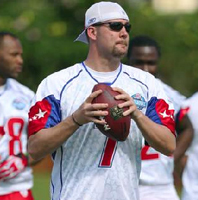 And while you’re in the voting mood…

Ben completed 36 of 50 passes for 365 yards, two touchdowns and one interception in the Steelers’ 25-17 win over the New England Patriots. His total passing yards were the most of any quarterback on the weekend.

Vote for the Ben’s performance against the New England Patriots as the GMC “Never Say Never” moment of Week 8!

Big Ben helps Steelers beat Patriots – Tom Brady and the New England Patriots had dominated the Pittsburgh Steelers over the past decade, winning six of seven games played. But on Sunday, quarterback Ben Roethlisberger put his team on his back by completing 36 of 50 passes for 365 yards and two touchdowns, as the Steelers shut down Brady and the Patriots, 25-17.


You can vote for the play here.

If you didn’t get enough of last Sunday’s win against the New England Patriots, you can watch it again tonight on NFL Network’s Replay starting at 9:30 PM:

“New England Patriots vs. Pittsburgh Steelers (10/30/11) – Ben Roethlisberger leads the Steelers to a gutsy 25-17 win against the Patriots in Pittsburgh. Roethlisberger throws two TD passes on 365 yards, while Tom Brady is limited to a season-low 198 passing yards.”


You can check out the rest of NFLN’s schedule this week here.

“He is a refrigerator with a head.” – ESPN Radio‘s Colin Cowherd, describing how difficult it is for defenders to tackle Ben and get him to the ground.

On a sad note today…

Love and prayers go out to Emmanuel Sanders and his family on the passing of his mother.

You can send your messages of support to Emmanuel via his Facebook page and his Twitter page.