Wednesday: Ben talks to the media

Home/News/Wednesday: Ben talks to the media
Previous Next

Wednesday: Ben talks to the media

“I don’t know how much, how often I can talk about Heath. I always talk about how good he is and what he’s meant to me. He’s a guy that is going to give you everything he has. He caught basically two touchdowns either on back-to-back plays or two within three plays and got his head knocked off on both of them and made a play. He’s just tough. He’s mentally tough, he’s physically tough. He gives everything he has every single day and that’s in meetings, that’s in practice (and) that’s in the game. That’s what makes him so special and what makes it an honor to play with a guy like that.” — Ben, on Heath Miller.

Ben weighs in on this week’s game against the Jaguars: 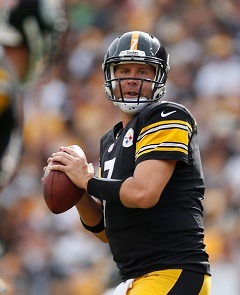 Re: The Pirates and how good it feels to see other teams do well:


Do you have any advice for them?
Just win (laughing).


What did you mean when you said on your radio show that players have to toughen up and get better?

Exactly that. It’s just a general statement that we talk about in here. It’s just we need to be a tough football team and if you’re tough you can make the playoffs like the Buccos tonight.


How much can having officials at practice help the team and do you think it will help you guys?

I guess it’ll help. I don’t know. We have them at training camp. I know they come for a little bit. But if Coach thinks it’s something that can help us why not give it a shot to make us the best that we can be.


Does Blake Bortles remind you of a young you?

A young me. Yeah I don’t move quite as well as I used to. But yeah I do. I liked him coming out. I thought he was the most ready and a guy that I thought could be the best just because I think the things he does: he can extend plays, he can stay in (the pocket), he can throw the ball, he can throw on the run. He is an impressive-type young player. He makes some rookie mistakes but he also makes some plays that you don’t expect rookies to make in a good way.


Is Heath Miller an example to the younger players?
He’s an example we all should follow, everybody. In life and in football because he is a class act and someone that we all are better to know.


Are there any guys on the team that need to do more than their part based on who they are, talent level or status?

Well you have to be careful because if you try to do too much then sometimes you don’t do your job. Our thing is just do your job, do it to the best of your ability and if we all do that at the same time then we all should be better for it.


Does Miller ever say anything in the huddle?

Very, very rarely. If I call the play wrong he’ll tell me.


Re: If he had reviewed the third-and-five play from last week where he had a run-pass option:
Yeah it kind of is. It’s a run play that if they don’t cover a guy you can throw it to him. So it’s not really a check to a pass play. The line was blocking run all the way so it’s not like you can drop back and throw a pass. It’s a run option that if they don’t cover one of the guys we can throw it to them. So if you want to call that a run-pass option I guess it is. But it’s pretty much a run and we have to believe that we can get that when it’s called.


Re: The false start, illegal snap call and was that wide open to run left:

I think it would have been good. I think it’s one of those things that happens that just never happens. We’ve got a Pro Bowl center that’s the best in the game and it was just something. It was kind of (a) crazy, fluky thing that happened and I think it would have been enough to get us a first down. But that’s a would-have, could-have, should-have that we can look back on a lot of things in a game.


Re: The play being there:
Could have been a good one.


Does Bortles remind you of yourself at his age with his demeanor?


Re: Being forced into a similar starting situation but having an older team to work with than Bortles has:

Yeah he’s got a very young team. They’re loaded up with draft picks this year. I was blessed to come to a team that was faced with veterans and experience (and) been-there, done-that guys. Definitely different situations.


Is it better to play right away or to watch and learn?

I typically would say to sit and watch. In my situation it was different because I had an older team so my situation was different than most. But I think it helps you so much to be able as a young guy (to sit). Look what Aaron Rodgers did. He got to sit behind Brett (Favre) for a while. I think it helps those guys to sit for at least a year to kind of see and get a feel for what you want to do because this is a much faster game than college.


What do you see in the Jacksonville defense?

They get after it up front. They’re either leading the league in sacks or they’re top two or three in sacks. They really get after the quarterback and create issues so a tough test for our line but it will be a good one. I know they’ll be up for it.

Well you’re definitely a little disappointed in our record. But you look at the silver lining it’s that, ‘Hey last year we were 0-4.’ So we’re doing better than we were last year but we’re still going to be disappointed where we are but that first quarter is over now. We’re starting over now. We want to get our first win and root on the Bucs tonight.


You can read his full interview here, and watch the video here.

If you missed Ben’s radio show yesterday, you can read excerpts here (and listen to the audio at the bottom of that page).