Wednesday: Ben’s meeting with the media

Home/News/Wednesday: Ben’s meeting with the media
Previous Next

Wednesday: Ben’s meeting with the media

“I’ll start just by saying, since I didn’t talk to you yesterday, thanks to all of our veterans, our troops, people that have served (or) that are serving. Thank you for your support and your service both foreign and domestic. We couldn’t do what we do, which is play the game of football, without all of you. So thank you all very much.” — Ben.

From Steelers.com this afternoon: 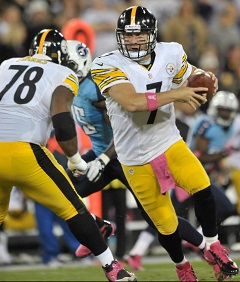 What have you learned from Alejandro Villanueva and how cool is it that he is coming on this trip?

It’s great. We went to Coach Tomlin with an idea and we knew he’d be receptive to it. I think it’s the least that we can do for someone that has done so much for our country.


Did you know that Rodgers Freyvogel is a Marine?

I did not know that. Well thanks to Rodgers, too.


Is there a little extra motivation to get a win for Coach Munchak this week?

Well I think the biggest think for Coach Munchak this week is to make sure he goes to the right locker room (jokingly). If he goes to the wrong one (then) we’re in trouble. But I think you can tell a little bit today that he has a little extra in him. I’m sure the line can answer that question better than me because they’re around him all the time. But we want to win this game for everybody. It would be kind of special for him to go there and get a win.


What about facing Ken Whisenhunt?

Yes, and Ray Horton, and I’m not sure who is all on their staff that we know. It’s special because I know Coach Whiz, and I have a pretty good relationship with him now. We text and keep in contact throughout the seasons. It will be special to go against him again.


Did you and Whisenhunt always have a pretty good relationship?


Did you have a good relationship the first couple of years you two were together?

I never really had an issue with coach. We butted heads as lots of people do, but I don’t think it was any issue. B.A. (Bruce Arians) and I butted heads, too, and you would have thought we were too close.


What will it take for the team for you to feel sure that it is mentally ready to face a 2-7 opponent?

Just go out this week and do what we always do (which is) to prepare and get ready to play.


What are your thoughts of William Gay being selected as the Steelers’ Walter Payton Man of the Year and his off the field efforts?

That’s great. It’s very, very well deserved. He’s a guy that I know is so passionate about the community, about foundations and charities are things that he’s tied very close to. Obviously his play on the field is spectacular. So I think that’s a very, very good pick.


Re: His new restaurant venture that he is planning in the North Hills:

The thing about it is my focus is on football. I’m lucky to have partners that do all of the stuff and I just have my name on it. It’s not like this is the first thing. We’ve got a couple of them down south, so we’re going to bring one up here. Like I said, I have to defer all my answers to them because I focus on football. I don’t focus on anything else right now.


Are you thinking about a second career after football?

No because I’m still playing football right now. That’s all that matters to me.


You can read more from his interview here.

You can watch the video of his interview here.


Did you miss The Ben Roethlisberger Show yesterday on 93.7 The Fan?


You can read the highlights and listen to the entire show here.