“I can move [the arm] around, that’s not the issue. Sometimes when I do move it the rib will kind of pop out of place again, which is pretty painful. I just try to keep it as still as I can for the most part.” — Ben, on both the injury to his shoulder and his rib.

Ben spoke to the media today after practice and gave an update on the injuries he sustained during the Monday night game against the Kansas City Chiefs. 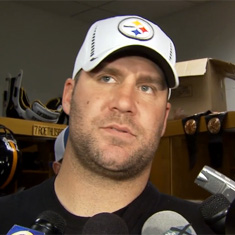 Wearing a sling to support his right shoulder, Ben told reporters gathered in the locker room that he not only suffered a sprained right shoulder, but also dislocated a rib as a result of that third quarter sack by Kansas City linebackers Justin Houston and Tamba Hali.

The rib injury is more of a concern to him than the shoulder.

“From what I understand, it’s the SC joint and a dislocation of the first rib,” said Ben. “That’s the scary part because I guess if it goes in the wrong direction it could puncture the aorta. So that’s more of the issue I think, that’s probably the more painful part.”

Ben has been ruled out for Sunday’s game against the Baltimore Ravens and said he cannot play until the rib heals. He doesn’t know how long that will be, but doesn’t think it will mean the end of his season.

“I don’t think so, I don’t know though, I’m not a medical expert. I’m just going to do what I can to get back as fast as I can.”

Asked if he was going to be able to hold his newborn son soon, Ben said, “I better. I’ve got one good arm.”

And while he is disappointed about missing Sunday’s game, he has full confidence in both Byron Leftwich and Charlie Batch.

“I have no fear because of the backups that we have,” he said. “Both guys are extremely capable. Byron’s a great player. He’s been doing this for a long time. I know he’s going to go out there and give it his all. I’m going to do exactly what he does for me and what Charlie does for me, whatever they need. If he doesn’t need anything, I’m not going to give him anything. I’m not going to be in his ear and tell him to do this or do that. He knows how to play this game, he knows how to play at a high level and I’m just going to be there for whatever he needs.”


*Thank you to everyone who has sent well wishes to Ben!

“Until the ball is snapped, I’m still preparing as if he’s playing. Like I said, I saw the guy play on a broken ankle when he came down here, and we even broke his nose, and the guy continued to play, and if you all recall, it didn’t pan out too good for us at the end of that game. So like I said, until that ball is snapped when we’re on the field and [the Ravens offense is] off the field, I’m not ruling him out. You can never question this guy’s toughness. Guys like that are what this game is about.” — Ravens OLB Terrell Suggs, during his own interview with the Baltimore media today.