“Every game for us right now is a must win and an important, pivotal game for the season.” — Ben, on whether this Sunday’s game against the Patriots is a “must win”.

Big Ben met with reporters today before practice. Among the topics he was asked about was whether more plays were being called for Antonio Brown, the timeout called during last Sunday’s game, the calling of plays and his input, and facing Tom Brady and the Patriots. 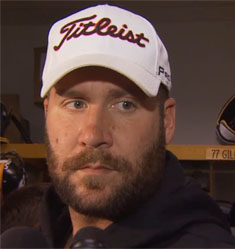 Re: Facing the Patriots:|

It’s always a tough place to play. They are a good football team. It’s a good crowd. It doesn’t get any easier for us this week.


Re: Scoring some early and its importance:

Yeah. Absolutely. That’s kind of been one of our problems on offense. We haven’t started fast enough and scored points early. We kind of put ourselves in a hole, typical fashion this year. It’s hard to get out of it.


Are more plays being called for Antonio Brown? Are you looking for him more?

Yes and yes, and probably more yes’s. He’s a playmaker. We design plays for our playmakers, whether it’s screens or down the field stuff. Then, when things break down, he makes plays. He gets into areas. He has great hands, even if you throw a bad ball. Last week he made a really good catch on one of those scramble plays. I think a lot of factors contribute to that.


Is he still pushing to get more balls?

All of them are. Everyone except Heath Miller. Heath never asks for more passes. [Smiles] Like you just said, knowing that he’s getting more balls and more catches, he’s making plays. I think when you are losing, people make bigger deals out of things than what is really there. It’s not like he is going and complaining or crying or things like that. He’s going up and asking for plays because he wants to make plays to help us win games.


Re: Talking with Coach Tomlin about the timeout situation last Sunday:

We talked. Like I said, I’ll take the blame for that incident on Sunday. It won’t happen again. He preferred me, in that situation with that much time, to save the three timeouts and take the penalty yards. He also saw where I was coming from in my thinking. That’s my fault for not getting it better at the time.


What was the argument part of that with the referees?

When you horse-collar the starting tailback, that’s how injuries happen. That’s supposed to be a point of emphasis. So, I know people want me to get back in the huddle. I still have to get the play. The play doesn’t come to me once I get in the huddle. The play comes to me at any time. It’s not like I was blowing the coach off or the play to argue. I was over there trying to protect my players. And I feel as a quarterback and as a captain of this team, you have to do that. You have to protect your players. You’ve seen me argue with guys when I feel like I think it’s a possibility of injury. It hasn’t affected us before. I think it’s a non-issue. I know someone had mentioned that before.


Re: Admiration for Tom Brady who began this season without any receiving targets from last season’s team:

That’s what makes the great ones great. He’s found a way to win football games that are close and with guys that no one has ever heard of. You admire someone like that.


Re: Big plays that Antonio has not made and are you frustrated:

No. He and I talked on the plane ride home. The expectation is for him to always make those plays. So you don’t get upset or frustrated when it doesn’t happen. It’s like when Heath fumbles. You don’t expect it to happen. What are you going to do, yell at Heath for fumbling once every 30,000 games? It never happens, so when Antonio drops a pass, he is human. I throw a bad ball sometimes. He’s made enough plays for us that it’s not worth getting upset or frustrated over.


Re: Saying that you are holding him to a higher standard:

He’s our guy. He’s going to hold me to a higher standard. I am going to hold him. We all have to hold each other accountable here and hold ourselves and hold each other to levels that I think we should play at. I feel that he is playing at a very high level. If you watch defenses, they obviously feel the same way, because they are doing a lot of doubling and safeties are rolling his way. We expect him to make plays just as I know he expects himself to make plays.


Re: Having a script that you follow in games and how often you go off or on the script:

You stay on it. There are obviously situations and circumstances, like if you are backed up or there is a long third-down. You stay on the script pretty regularly.


The team hasn’t scored that much in the first quarter this season. Are you guys doing too much feeling out or are you not being as aggressive?


Do you have any input in that?

The top-10, we will usually go over it on Saturday night. If there is a play that I don’t like or we need to move around, then we can alter things like that.


Does going up against a QB like Brady or Peyton Manning get the competitive juices flowing more?

A little bit. You expect a guy that has done it for as long as he has and that has won the championships, I will sit there and watch closely. I hope that he has the worst game ever because our defense played that great. [Smiles] That’s what you hope every time. I will sit and watch him closely. If there is something, even one thing that I can pick up from his game that I can use to make my game better, I will try to do that.


You are on a pretty good sack pace. Are you feeling it?

[Laughs] I am alright so far. As long as we slow it down soon.

You can watch & listen to Ben’s entire Q&A here.