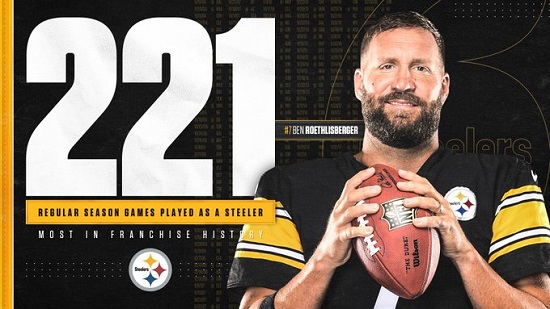 Ben has now played in 221 career games for the Steelers, a franchise record – topping the previous mark of 220 by Mike Webster.

“It’s such an honor to be up there with Mike Webster, he was ‘Iron Mike’ for a reason. I am humbled to be in the same category as him. It’s not like I passed him, I joined him.” — Ben, during his post-game press conference.

And now to the game:

“It’s huge for us, especially at home. We want to win it for the fans. For us to get off to a good start like this is important and fun.” — Ben, during his post-game press conference.

Big Ben completed 26 of 36 pass attempts for 237 yards and two touchdowns during Sunday’s 28-21 win over the Texans.

Roethlisberger completed 72 percent of his pass attempts while spreading the ball around to seven different receivers. He completed touchdown passes to Eric Ebron and Juju Smith-Schuster in the second quarter but deferred to the running game a bit more in the second half. Although the yardage total was nothing to hang his hat on, it was a rather efficient performance from Roethlisberger against what has been a surprisingly adept Texans pass defense to this point. He will look to take advantage of a more favorable matchup against a soft Titans defense next Sunday.

“Ben Roethlisberger and Co. rally past Texans at Heinz Field”

The Steelers started 3-0 for the first time in 10 years and only the third time under Mike Tomlin after their 28-21 comeback victory Sunday against the Houston Texans at Heinz Field.

James Conner rushed for 109 yards, Ben Roethlisberger passed for 237 yards and two touchdowns and the Steelers got big contributions from two of their newest players — tight end Eric Ebron and rookie running back Anthony McFarland Jr. — to start 3-0 for the first time since going to the Super Bowl in 2010.

The Texans (0-3) had leads of 14-3 in the second quarter and 21-17 at halftime, but the Steelers battled back with the second of two Chris Boswell field goals and a 12-yard touchdown by Conner.

The Steelers were at the 3-yard line with two minutes remaining, but Roethlisberger took three consecutive kneel-downs to run out the clock.


You can read more from Mr. Dulac here.

You can watch Big Ben “flash the wheels” on a third down run in this highlight.