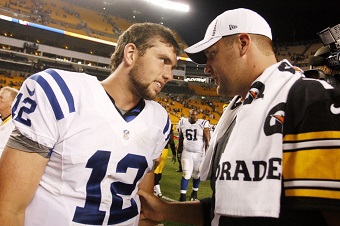 Ben expects to play for the first time this preseason when the Steelers host the Indianapolis Colts at Heinz Field on Saturday night.

He just doesn’t expect to be out there too long, though.

“I think that’s what it’s going to depend on how well we play, how long we play,” said Roethlisberger. “I’ll probably go two series.”

Roethlisberger said the playing time is about getting the offense fine-tuned in advance of the season opener against the Cleveland Browns on Sept. 10.

“Looking just to click, move the ball, and pick up first downs,” said Roethlisberger. “Obviously getting in the end zone is always a big deal. We want to move the ball.”

He will still be without one of his biggest weapons on offense, running back Le’Veon Bell who has yet to sign his franchise tender. Bell hinted via Twitter that he will be returning to the team on Sept. 1, ahead of the opener.

“We’ll be ready for him whenever he gets here,” said Roethlisberger. “We always want our guys here. He didn’t have to be here. We want him here. He is an amazing football player. He helps this team. Hopefully it won’t take him long to get into football shape.” 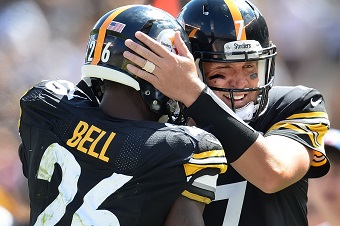 And he definitely emphasized ‘football’ shape, something that will be key for Bell who is coming off a knee injury.

There will also be the mental aspect of the game to catch up on. Roethlisberger said the offense has put new wrinkles in, something that isn’t uncommon each year but there were more additions this year than in the past.

“We’ll do everything we can to get him up to speed and the rest is up to him,” said Roethlisberger, who hasn’t talked to Bell, but said there are no grudges. “We have a couple of bigger (wrinkles) this year than usual. Every year you change some things. It just happens this year we have more than usual. He is a very smart football player. He is physically gifted. He can relay meeting room stuff to the field pretty easily.

“There will be some mental stuff this year because there are quite a few new things. But physical, he is a physical back. It’s a violent sport, the running back position takes a beating. We just have to hope the other guys are ready to go if he needs spelled. If he just comes back, I don’t know if he will be ready to play every single play like he does during the season. We are going to have to have other guys ready to give him breaks.”


You can watch & listen to Ben’s interview here. 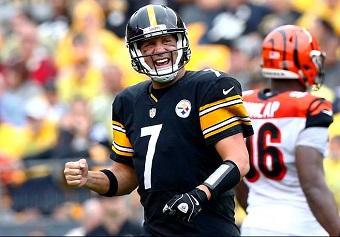 Fearing for his physical and mental health, the Steelers quarterback is serious when he says he’s contemplating retirement. What brought him back for a 14th season: an immensely talented Pittsburgh roster and a chance at that third ring.

“I can’t predict the future,” Roethlisberger said after practice on Thursday, with large bags of ice wrapped around his right elbow and right knee. “I am definitely just going one year at a time. I love this game, but I love my family more than I love football. That will certainly be a factor. My wife and I talk about it. My wife is not going to tell me to get out. She says, ‘ I love you. I know you love the game.’ But I did say this at the start of camp, ‘I want my kids to remember me playing football.’ My wife said, ‘I also want you to remember football.’”

For now, Roethlisberger is keeping those creeping fears at bay by going through the familiar motions of camp. As players sauntered onto the field for practice Thursday, Roethlisberger and his center, Maurkice Pouncey, were playing their usual pre-practice game. They were taking turns throwing footballs, trying to hit the crossbar on the uprights. As they went on, they stepped back to the 20, 25, and 30-yard lines. On his last throw, Roethlisberger nailed the bar from the 35. The crowd cheered, and he threw his fist in the air.

“I’m up 6-1” so far this camp, Roethlisberger later said, with a grin. 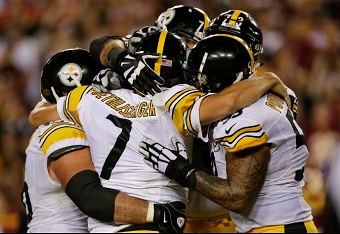 Once practice started, it was clear the Steelers were treating Roethlisberger with caution. While everyone contorted themselves for pre-practice stretching, he was playing catch with a coach. Every other 11-on-11 drill, it seemed, Roethlisberger sat out. He’s not expected to play much during the preseason, either. The Steelers hope to play him for five to six series—that’s it.

When Roethlisberger did practice, he looked as sharp as he usually does. During one seven-on-seven drill, he lofted a nice pass down the right sideline to Martavis Bryant, the 6′ 4″ receiver who missed all of last season after being suspended for violating the league’s substance abuse policy. Roethlisberger had previously told the Pittsburgh Post-Gazette that he felt lied to and let down by Bryant. They have apparently made up. During a two-point conversion drill, Bryant scored on a double reverse, and Roethlisberger ran and hugged him in the end zone like they had won the Super Bowl.

Once Roethlisberger gets talking about this offense and the season-at hand, the retirement talk fades. The day after he appeared on that Pittsburgh radio show and first mentioned retiring, he came to the Steelers’ facility to meet Haley for his exit interview, a year-end meeting during which the coach and player review the season and discuss their next steps going forward. They spoke at length, and the topic of Roethlisberger retiring never came up. “I didn’t bring it up, and he didn’t either,” Haley says. “All he talked about was what we needed to do to get better. … It just speaks to Ben’s competitiveness and desire to put everything else aside. The No. 1 goal is how can he do his part to get us into that big game, with a chance to win it all.”