“There is no question Ben has grown over the years and truly has become a leader of our team.” — Art Rooney II

“It’s home. It’s family. As much as my wife and kids are family, so is the Rooney family and my team and coaches.” — Ben, on why he wanted to stay with the Steelers. 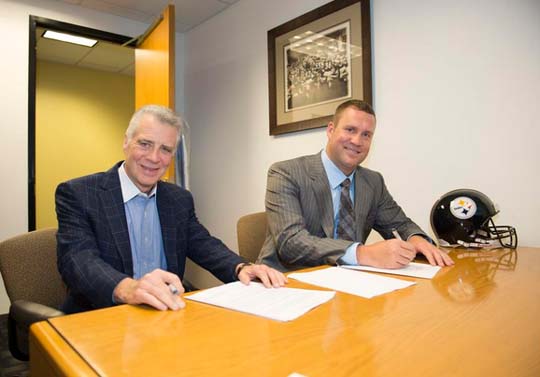 From Bob Labriola this evening:

Corny, maybe, but it was a family affair late in the afternoon on a Friday the 13th at the Steelers practice facility.

On hand were Ben Roethlisberger and his family – wife Ashley, son Ben Jr., and daughter Baylee – and the news conference was called to mark the occasion of the team’s franchise quarterback remaining a part of the Steelers family through the 2019 NFL season.

Just minutes before Steelers President Art Rooney II walked to the podium with a big smile on his face, Ben Roethlisberger officially had signed a new five-year contract that binds him to the team through the 2019 NFL season.

“We are excited to announce today that we’ve agreed on a new contract, a five-year deal,” said Rooney. “We are looking forward to the future, and we certainly know that Ben has a number of great years ahead, and he will continue to lead our team. Right now, as you all know, he owns most of our (passing) records, but there are still a couple of important records that we are going after in the next few years.”

Roethlisberger turned 32 on March 2, which means he will be 37 when this contract is set to expire. Entering his 12th NFL season in 2015, Roethlisberger will have played 16 NFL seasons come the conclusion of the 2019 season, all of them with the Steelers, the team that selected him on the first round of the 2004 NFL Draft.

“It’s kind of hard to contain my smile when I’m excited to be at a place like this, to be home, and to be able to be here for my whole career,” said Roethlisberger. “I know most of you have heard me say for a long time that this is where I have always wanted to be and where I have wanted to spend my whole career. This organization has given me an opportunity to do that. I just feel very blessed to have the opportunity to play for such a great franchise, with great coaches, great teammates, and the best fans in the world. I’m extremely happy that we got a deal done. It’s incredibly fair for both sides. We are just excited to move forward and get some more Lombardi trophies in that room next door.”

Roethlisberger was going to be entering the final year of his previous contract, but that was torn up and replaced by the deal he signed late this afternoon.

“First and foremost, our goal is to win Lombardi trophies,” added Roethlisberger. “I’m excited to be able to really put the pedal to the metal. I think we have a good, young football team that has a lot of talent and a lot of ability. Walking down the hall, I asked if there was room in that trophy display for more trophies, because that has to be our ultimate goal. I trust that Coach (Mike) Tomlin and the organization will put the best team on the football field, and we are going to give it everything we have.”


You can read more here, and enjoy a few photos here.

You can check out video highlights of #7’s finest moments during the 2014 season here.


*Thank you to the Steelers organization for their continued support (and this great photo!).