“Ben is our general. Any time he is in the huddle, you always know game on and he is on the verge of being special and doing things to make guys around him better. He is one of the best to do it. When he shows up, we know what time it is. It absolutely amazes me every time he makes a huge play. He is back there shaking off defenders, being able to throw the ball down the field. He just continues to get better, evolve, play hungry and be motivated.” — Antonio Brown. 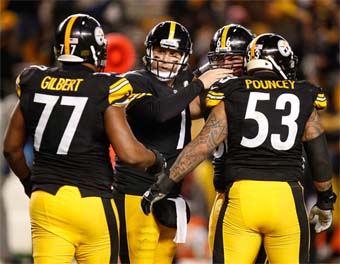 Some of Roethlisberger’s teammates shared what Roethlisberger means to the offense and what makes him the franchise quarterback that he is.

“Ben is the ultimate leader. He makes guys around him better, just with the little things, being prepared, and challenging the offense. He is always encouraging everyone to get better.”

“He means everything. He is the guy that makes us go. In the huddle, in practice, you see him put everybody on the same page. He is the starter, he is the leader of the offense and we all follow him.

“For me personally, there are a lot times during games he has told me not to get frustrated. He understands I might have the first eight carries and only get two yards on each carry. He always tells me to stay patient, my runs will come and things like that. He is a leader and he helps me become a leader.”

“I am glad to have him as my quarterback and I think he is one of the elite guys in the league. It’s fun playing on the line with him as the quarterback. A lot of teams don’t have that luxury of having an experienced quarterback and Ben has won two Super Bowls. He knows how to win, he knows it was just a matter of us catching up with him. When you have a guy like Ben you always have a chance to win games and championships. He is a guy who has grown more and more with his leadership skills.”

“For him to do what he does, the longevity he has been doing it for, in an unconventional way, you take notice and respect it. Nobody is doing it like he is doing it. He is a one of a kind talent.”

On going against Ben in practice:

“In practice he is always trying to break our will. He is trying to score as many touchdowns and have as many productive plays as possible. Going against him prepares us for any team we go up against. As much as I love going up against him in practice, what he does in games is give us a chance to win and we feel confident when he has the ball in his hands.”


You can read more of Ms. Varley’s interviews here.