“Teammates dish on what makes Ben Roethlisberger the player he is” 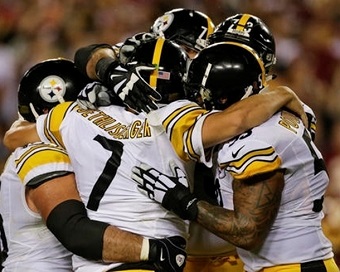 Ben Roethlisberger has been a key to the Steelers success and getting them into the playoffs, and much of that is, ‘Ben being Ben.’

A few teammates who see firsthand what Roethlisberger does weighed in on what makes Ben, Ben, and why he is so special.

“You just have to turn on the tape. People fear No. 7. I just sit back and watch. Like he said earlier this season, just follow him. He is a great leader, a great player, and a winner. His attitude. He wants to win and he is going to do that. You follow behind that. He is the captain, the quarterback. That is a great thing to have.”

“He rises in big time moments. When we need him the most, we can count on him. That is what makes him a special player.”

“His leadership. His ability to always stay focused and keep things balanced within the offense. His pocket presence, being able to move around and extend plays. And his arm. I mean there are all type of qualities that make Ben great. He is a Hall of Fame quarterback. I am just humbled to be playing with him. It still feels like a dream. He is the best.”

“You can’t sum him up in one word or sentence. It’s those intangibles. He is the ultimate competitor. He wants to win, needs to win, and he proves it.”

From Ms. Varley once again: 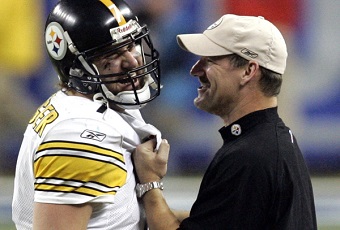 On the day Ben Roethlisberger was drafted back in 2004, Bill Cowher made a statement that was definitely a fact.

“This kid has a lot of upside,” said Cowher, who coached Roethlisberger his first three seasons in the league.

Now, as Roethlisberger is set to lead the Steelers into the postseason, Cowher has far greater words of praise for him and the way he has grown.

“When I left here 10 years ago he had just completed his third year here and he was a young player, a talented young player,” said Cowher. “He was in the process of trying to make this his team. There were still a lot of veterans around him.

“What you see right now is a guy who this is his football team. He is very mature. A guy this team looks at as their leader. He sets the tone. You can tell by the way he handles himself, he has been in this situation before. You don’t change things. But the preparation is better. He is the one people are looking at. He has grown as a person, as a player, and his play has reflected that.”

Cowher, who was at the UPMC Rooney Sports Complex on Thursday to talk with Coach Mike Tomlin for a story on CBS’s ‘The NFL Today,’ said he enjoys watching Roethlisberger play and still is amazed by his physical talent.

“The biggest thing is he has an unbelievable physical skill set,” said Cowher. “He is physically gifted. He is a tremendous athlete for a man his size. He has a great feel for the game. You don’t realize it until you are around him that he has such a great feel for the game. He sees things. He is a big time competitor. This guy competes. The competitiveness is what separates him from a lot of people. He understands what it takes. He is calm in high pressured situations. You watch him in the fourth quarter and he wants the ball in his hands.

“I love his focus, his competitiveness. He is a tremendous athlete, has a great feel for the game. I go back to the one thing, Ben is a tremendous, fierce competitor.”