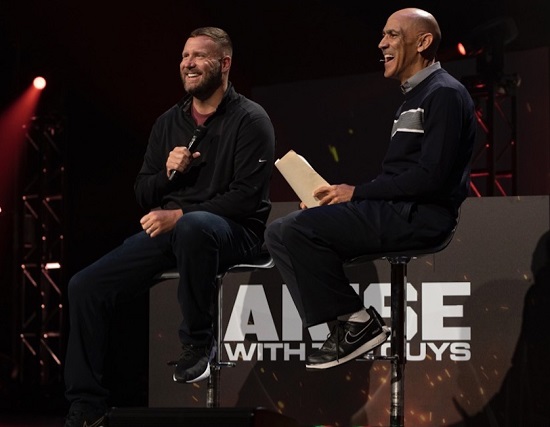 Football brought Ben Roethlisberger fame and fortune at a young age. But, it was rediscovering his faith later in his career that completed him.

After becoming the youngest quarterback to start and win a Super Bowl in 2005, the star athlete known as “Big Ben” received many honors and attaboys tossed his way.

Somewhere along the way, Roethlisberger admits drifting away from his faith.

“I was down low and realized that I need something more,” he said.

His parents baptized him as a baby. But in 2018, he decided to be rebaptized “for himself.”

“It just made me feel full again,” he said.

Talking about their spiritual journeys

Roethlisberger, who announced his retirement after 18 seasons with the Steelers in January, talked candidly about his faith with Tony Dungy, the former football coach turned author and broadcaster, at Grace Church in Eden Prairie on April 23.

Both were in town for “Arise With The Guys,” the annual men’s only event hosted by the church in partnership with Dungy, Athletes in Action and Fellowship of Christian Athletes.

The morning’s highlight was Roethlisberger, first being honored as the event’s 2022 Uncommon Award Winner and then throwing passes across the stage to three lucky boys pulled from the crowd.

Dungy has given out the Uncommon Award at “Arise With the Guys” since 2013 to honor athletes who are never afraid to follow a higher calling or set a higher standard. Past recent recipients include Dabo Swinney, Ben Utecht, Case Keenum, and Peyton Manning.

According to Dungy’s 2009 book, “Uncommon: Finding Your Path to Significance,” Stoll told him and other players: “Success is uncommon, therefore not to be enjoyed by the common man. I’m looking for uncommon people.”

As an athlete, Dungy said Roethlisberger is uncommon for only playing for one team during his long career and quarterbacking a team to two Super Bowl wins.

But, Dungy stressed just how much Roethlisberger matured as a person over his career. Dungy said Big Ben learned that life isn’t all completions and Super Bowl rings.

“It’s more than that and it’s serving the Lord,” Dungy said.

Roethlisberger told the audience that he grew up going to church every Sunday, but his faith took a back seat to football once he got to college and the pros.

“At the time, I thought a lot of (his success) was because of me and how good I was,” he said. “Looking back on it now, I realized it was because of how good God made me.”

Athletes can be superstitious, and Roethlisberger was no exception. As his faith grew, he realized that superstition is for the non-believer.

“Later in my career, I started saying, ‘Listen, God help me. This is your stage, not my stage,’” he said. “I’m about to go out of this tunnel in front of 70,000 people waving the black and yellow towels, but it’s really about him, not me.”

He told the crowd that he used to wear the initials PFJ (which stands for Playing For Jesus) on his shoes. It isn’t allowed anymore under the NFL’s uniform policy.

“The last five years I’ve had it on; they just don’t know where it’s been,” he said. “That’s what it’s been about for me. It’s about playing for Jesus, giving him the glory, because he’s the one that gave me the ability to throw a football, to throw people off me and have fun doing it.”

Now that his playing days are over, Roethlisberger wants to use the platform “God has given me” to build bonds between fathers and sons.

Roethlisberger, who has two young sons and is close to his father, aims to host father and son retreats at a farm he bought. It has a fishing pond, horses and chickens.

He sees two things missing in today’s society: father figures and the outdoors.

“We want to bring fathers and sons in for a weekend to let them reconnect, to let them connect,” he said. “The aim is to help find a way to strengthen that very important relationship.”

Men, he adds, are taught to be strong pillars for their families, community and church. But, he thinks men shouldn’t be afraid to be vulnerable.


You can read more from Mr. Sudak’s article here.