Did you miss Ben’s show this morning at 11AM on 98.7 The Fan with Cook and Poni?

Here is a recap: 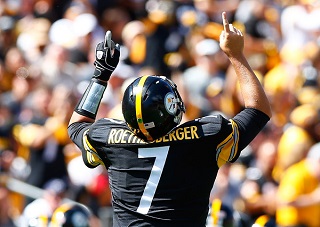 Coming off a huge performance for the entire offense against the San Francisco 49ers, Steelers quarterback Ben Roethlisberger joined “The Cook and Poni Show” like he does every Tuesday at 11 a.m. and said despite how good they looked, they still have things they can clean up.

“We had some penalties that hurt us,” Roethlisberger said. “We had two, three-and-outs that shouldn’t have been three-and-outs. I mean, we stopped ourselves and that’s frustrating. I had a bad call in the no-huddle that resulted in only a one-yard run when it could have been more if I had checked out of the play…All-in-all, a win is a win.”

Despite those “miscues,” Roethlisberger still completed 21 of 27 attempts for 369 yards and three touchdowns, so they weren’t all that costly. However, it shows the offense is already clicking and primed for a big season.
The offense even had success in an area where they tend to struggle – the redzone. Roethlisberger described what was different for them this time and why they were so successful.

“I have to give Coach Haley a lot of credit,” Roethlisberger said. “I told him this Sunday night when I got home and texted him, I said, ‘You know coach, I give you credit,’ because when we were driving down the field in the no-huddle, we got down a couple of times to the 5-yard line, the 10-yard line, and sometimes even closer and typically, I would expect to hear in my head…ok, huddle up, we’re bringing out this goalline package, jumbo, him calling a play. He never once did that. That’s to his credit that he just kind of let us keep rolling in.”

Roethlisberger also talked about the team’s aggressive approach to extra points and going for two more times than electing to kick.


You can read more & listen to the full podcast of Ben’s show here.


You can also listen to Ben’s interview on the Shaqcast – The BIG Podcast with Shaq from yesterday.

Cast your vote for Ben!