Looking at that MNF game from the Bucs perspective

Looking at that MNF game from the Bucs perspective

“The Bucs blitzed Roethlisberger, and he burned them.” — Thomas Bassinger.

More from Mr. Bassinger at the Tampa Bay Times: 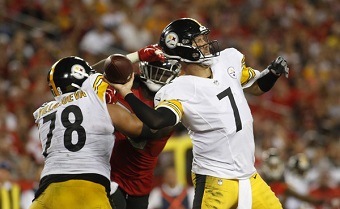 The Bucs spent the first two weeks of the season rewriting the rules about how the Bucs play football. The new Bucs jump on teams early. They score 50-yard touchdowns. They protect the football like DeSean Jackson protects his gold chains.

There was bound to be some regression. But no one expected regression all the way back to 2017. At least that’s what it felt like we were watching Monday night. A mistake-filled first half. A double-digit deficit. A furious comeback. And, ultimately, a letdown. Just like the loss to the Cardinals last season. And the Bills. And the Falcons.

The second half was fun, but it was largely noise. The game already had been decided.

The Bucs had only one deep safety, meaning that Grimes was one-on-one with Brown. If Brown beats Grimes off the line of scrimmage, it’s an easy touchdown. The problem is that Grimes flat out missed the tackle. Missed tackles were an issue all night long for the Bucs. They missed a season-high 10.

There’s more to that play than Grimes’ missed tackle: The Bucs blitzed Roethlisberger, and he burned them. He got the ball to Brown so quickly that the extra rusher didn’t even faze him.

When we talk about blitzing, we often talk about the rewards and disregard the risk. The Bucs haven’t been a high-percentage blitz team in recent seasons, and for good reason. They’re not particularly effective at it, and they could use the help in coverage.

Almost every defensive coordinator will tell you he wouldn’t blitz if he didn’t feel like he had to. He’d prefer to generate pressure with his front four linemen alone.


Veteran quarterbacks will exploit the open windows that a blitz creates, as Roethlisberger did repeatedly Monday. He was nearly flawless against the blitz, completing 10 of 12 passes for 162 yards and a perfect 158.3 quarterback rating, according to Pro Football Focus. He threw all three of his touchdown passes while being blitzed.

On Roethlisberger’s first touchdown pass, he diagnosed that the Bucs were in man coverage, and as soon as he saw linebacker Lavonte David rush, he dropped a pass into the zone David had vacated.

On his third touchdown pass, the one that put Pittsburgh up 30-10, the Steelers emptied the backfield and spread out the defense. The Bucs sent David and Kwon Alexander, but before they could get to Roethlisberger, the ball was out and on its way to Ryan Switzer, who was one-on-one against safety Justin Evans.

What I got right: Pittsburgh would overcome distractions and play well enough to win.


“That was a big win for us going on the road, playing against a really hot football team, a great environment, Monday Night Football, it’s everything you wanted and we got the win, which is exactly what we wanted and needed.” — Ben. 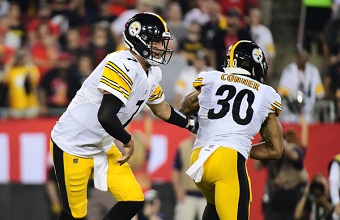 Ben says that JuJu Smith-Schuster has really developed into a big play receiver for them and is benefiting from Antoino Brown being double-covered.

“It may not be the, you know, the flashiest of ways, but he does the dirty work. He catches the underneath stuff, gets tackled, gets hit. He’s sure handed. He uses his body. He’s got real strong hands at the catch point. But he will take it down the field…He is reaping the rewards and benefits of teams doubling AB, and so that’s the best thing going right now for Juju is they’re doubling AB. If Juju keeps this up, they’re not going to be able to keep doubling AB.”

Roethlisberger also talked about Vance McDonald’s wicked stiff arm in the first quarter, “Vance is an incredible athlete and very strong, his locker is next to mine, Vance and I are very good friends. He takes pride in his work. That’s strength training and doing more than just catching and blocking. When he got his hands on that guy, it was all over.”

Winning can cure a lot of the off-field drama but Le’Veon Bell has yet to report and sign his franchise tag with the Steelers. Roethlisberger says they can only worry about the players that are there.

“It’s got to be rearview mirror for us. We can’t waste time talking about the unknown. We don’t know. None of us know when or if he’s coming back so we can’t sit there and spend time wondering about that. We have to focus on the guys that are there and playing the football games, so that’s what we’re doing.”

Roethlisberger than talked about getting two roughing the passer calls and the way that rule has been officiated this year.

“It is crazy. I said it last night; I don’t want to ever talk about officiating. The first one, I was definitely surprised. The second one, I got hit in the helmet. I know that people are saying I flopped. That was JPP, and he’s got that cast on his hand and the hand that he’s got that cast on was the one that hit my helmet. So it kind of rung me a little bit. You know, I might have went to the ground a little bit to sell it, but it definitely got me, so I think that’s a good call. It’s hard for the officials. What do you call, body weight, if you hit someone with your head and their head, things like that, those are easy ones. But when you’re asking a defender to come full speed at a quarterback, wrap him up and tackle him but you can’t land on him, man, I don’t envy what they have to do or not do.

Roethlisberger knows that penalties will happen but the Steelers had 13 penalties for 155 yards Monday night and it’s the undisciplined ones that drive him crazy.

Roethlisberger showed some frustration toward Antonio Brown last night during the game and then felt the need to apologize after the game.

“We had a chance to stay on the field to end the game, to not put it in our defenses hand. And I just got frustrated with what happened. I think I just showed too much emotion and so I felt like as a leader, and it was my place to make that known, and I could have just went to him and told him, but I felt like it was the right thing to at the start of my press conference to apologize to him.”


You can read more, or better yet, listen to Ben here.