From Megan Ryan at the Pittsburgh Post-Gazette: 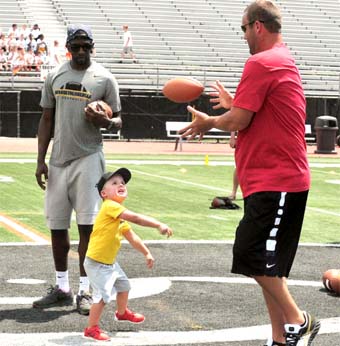 Ben Roethlisberger started his Father’s Day in typical fashion — with his children bombarding him in bed with hugs and presents.

Or as his wife, Ashley, deemed it, “cute little cuddle moments.”

But how the Steelers quarterback spent the rest of his day differed from the usual. He wrapped up his 10th Ben Roethlisberger Football Procamp, a two-day affair Sunday at Bethel Park High School, including throwing passes to each of the about 400 first- through eighth-grade youths.

Roethlisberger said these hands-on, personal moments with the campers are an important aspect of his camp, as he knows some other professional athletes don’t hang around from start to finish of their camps. The two-time Super Bowl champion said he is even going to see if he “can talk Mr. Rooney into” letting him host his camp at the Steelers’ South Side practice facility, the UPMC Sports Performance Complex, next year so the campers can play where the stars do.

“It’s just me getting to be out there with them and just kind of be free and no barriers, no walls,” Roethlisberger said of his camp. “Just have fun, be a kid and teach them everything I can.”

This year, since the camp happened to fall on Father’s Day weekend, there was a special dads-edition of the 40-yard dash. About 30 fathers came down to the field to race, and only one injury — a pulled hamstring — came out of it.

Peyton Marston, a 10-year-old from Wexford, attended the camp for his second-consecutive year and said he thought the camp was “good,” and he liked how the Steelers quarterback really talked to and taught the campers football. Marston’s parents came to watch their son both days, and his father, Tommy Marston, said it was a great, albeit hot, way to spend the holiday.

One of the future campers might just be Roethlisberger’s 3-year-old son Benjamin. The toddler walked and ran around the camp like he owned it, racing in one of the smokehouse 40-yard dash heats and even trying out some drills. Roethlisberger has two other children — daughter, Baylee, who is 2, and son, Bodie, who is 3 weeks old.

Three generations of Roethlisbergers roamed the stadium as the quarterback’s parents also were there to lend support. Brenda Roethlisberger, Ben’s stepmom, said these camps show the real Ben.

“There’s a lot of misconceptions sometimes in the media…about who somebody is, and by coming to a camp, you just get to see he’s about family and not showing off and working hard,” Brenda Roethlisberger said. “That’s what he’s trying to get with these kids. He’s just paying it forward.”

Ashley Roethlisberger said she and the rest of the Roethlisbergers see a side of the quarterback that no one else does, but she wishes people knew what a great family man he is. She said her husband gives the children baths, usually with a lot of giggling, reads them stories and puts them to bed each night. She called the father of her children attentive, energetic and a “superdad.”

“He’s wonderful,” she said. “He is probably the MVP of the household.”