Post-game recap from the Sports Xchange: 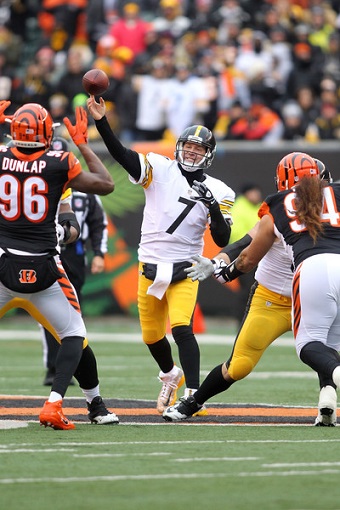 Ben Roethlisberger passed for 286 yards including a 24-yard touchdown pass to Eli Rogers with seven minutes remaining as the Pittsburgh Steelers rallied for a 24-20 victory over the Cincinnati Bengals on Sunday at Paul Brown Stadium.

Chris Boswell kicked a career-best six field goals for the Steelers (9-5) to tie a team record, and set up next week’s AFC North showdown with the Baltimore Ravens at Heinz Field.

Sunday’s game was the first between the teams at Paul Brown Stadium since last year’s AFC Wild Card game when unsportsmanlike conduct penalties on linebacker Vontaze Burfict and corner Adam Jones helped set up the game-winning field goal in a stunning Pittsburgh win.


“Those weren’t just chip shots. Those were some bombs that he made into the wind. And how about that tackle he made? He deserves the game ball, got it. “— Ben, on Chris Boswell’s performance today.

Steelers running back Le’Veon Bell suffered a torn MCL in November 2015 on a hit by Burfict but reportedly had made amends. Bell rushed for 93 yards on Sunday.

Cincinnati (5-7-1) gained only 38 yards in the second half after leading 20-9 at halftime. The loss eliminated the Bengals from playoff contention.

Bengals kicker Randy Bullock, a former Steeler who was acquired after veteran Mike Nugent was released, capped a 70-yard opening drive with a 23-yard field goal to put Cincinnati ahead 3-0. A key play on the drive was a 15-yard facemask penalty on defensive end Stephon Tuitt on quarterback Andy Dalton.


“A lot of satisfaction. It’s an AFC North road win against a good team. A tale of two halves.” — Ben, when asked about the satisfaction level of getting the win today.

A pass interference penalty on cornerback Artie Burns in the end zone gave Cincinnati first-and-goal at the 1. After having three runs stuffed at the line of scrimmage, Dalton scored on a fourth-down sneak to give the Bengals a 10-3 lead.

Cincinnati ran 21 plays in the first quarter to Pittsburgh’s six. 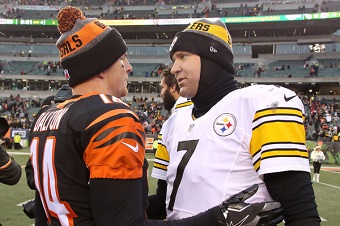 The Bengals’ domination continued into the second quarter when they drove 82 yards in 10 plays with Jeremy Hill scoring on a 4-yard run to make the score 17-3.

Another critical penalty, this time a chop-block on Bell nullified a touchdown pass from Roethlisberger to Brown. Pittsburgh settled for a 49-yard field goal by Boswell.

Cincinnati didn’t punt until 6:23 remained in the third quarter after Dalton was sacked for the first time in the game.


“That’s what a leader is supposed to do…I just wanted to keep everyone calm and under control. I thought, we as a team, did a very good job of that today.” — Ben, when told that several teammates informed the media that he was the one that kept everyone focused during the antics displayed by the Bengals.

Pittsburgh was trailing 20-15 when Steelers linebacker Lawrence Timmons picked off a Dalton pass and returned it to the Cincinnati 34-yard line. That led to another Boswell field goal.

The Bengals’ defense imploded during a 69-yard Steelers drive in the fourth quarter with a pair of defensive holding penalties and a personal foul penalty leading to Roethlisberger’s game-winner to Rogers.

You can see a few photos from today’s game here.