Wednesday: Ben’s “chat” with the media

Home/News/Wednesday: Ben’s “chat” with the media
Previous Next

Wednesday: Ben’s “chat” with the media 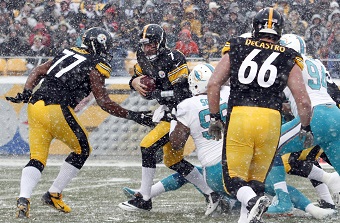 Having a deep threat, a guy with speed to get open downfield, is something Ben Roethlisberger has been fortunate to have in the offense over the years. In recent history it’s been players like Mike Wallace and Martavis Bryant.

Now it’s Sammie Coates who is his weapon, and Roethlisberger said it’s a combination of speed and playmaking ability that makes them effective.

“Being fast helps,” said Roethlisberger. “Throw it far and let them make the pay. There are some things we work on and we do it every day in practice. Most of it goes on them. I just throw it.”

Some of those passes Roethlisberger threw to Coates last week against the Jets ended up right on target, and while Coates made a few big grabs, including a 72-yard touchdown, he also dropped a few. That doesn’t mean for one second, though, that Roethlisberger has lost confidence in him as his go-to guy down field and he shared that with him on the sidelines during the game.

“This isn’t the first time I have said something to him,” said Roethlisberger. “What was encouraging this week is he almost sought me out to let me know to come back and believe in him. I said you don’t have to tell me that. I believe in you and I am going to come back to you. It was good to see that growth. 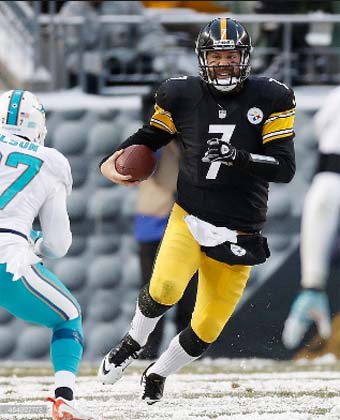 On if Coates is being used in the slot at times:

“We have before. You have to move guys around. Just like we move Antonio Brownaround, Le’Veon (Bell). Everybody’s got to be able to move around. If you keep somebody stagnant it’s easier to defend them.”


On if the plays downfield early are scripted or based on looks from defense:


On the passing offense:

“We’re pretty good. We have room for improvement. We have to keep getting better.”


On if Coates can’t play because of his hand, will Darrius Heyward-Bey step in:

“Hey Bey is a guy that has been around, knows what he is doing. He is a guy we all have faith and trust in to get it done.”


On if the notion teams play up or down to their opponent is true:

“I don’t know. I think every week everyone is trying to beat everybody. Certain teams have bullseyes on their chest, whether that’s Super Bowl champions, divisional champions. You just have to go out every week and play your best.”


On the Dolphins defense:

“They have very good defensive line. A little different than last week. Last week was a power group. This group has power in the middle and speed on the outside. Playing in their place is always more difficult for our line. This will be a different test than last week.”


On what he remembers from his first NFL start vs. Miami in 2004:

“Very wet. Just how much it rained. I remember the night before the meetings we didn’t have power. We had to use a flashlight. Just all kinds of craziness.”


On how you keep yourself from looking ahead to the next opponent:

“It’s this week. I don’t care who you are playing this week or next week. It’s all about right now. You have to play each opponent like they are the best opponent in the world. That is how we approach it. We are going out there to try and win one game. We are going in with a 0-0 record trying to get our first. That is how we approach it. Every week is the biggest week of the season for us.”

Looking back at that first game in 2004! 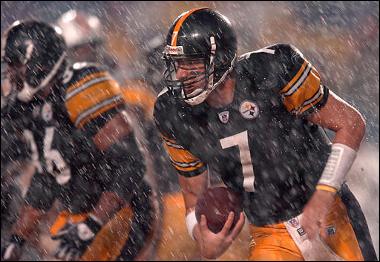 You’ll never guess what Ben Roethlisberger remembers about his first NFL start 12 years ago in Miami in the remnants of Hurricane Jeanne.

“I remember being in the hotel losing power and having our night-before-the-game meeting with flashlights. They went out and bought a bunch of cheap plastic flashlights. I’ll never forget that.”

“I still have my flashlight. I might bring it with me this weekend for old time’s sake.”

The Steelers play Sunday in Miami against the Dolphins. The weather and field conditions should be much better than in 2004. Certainly, Roethlisberger is a much different quarterback. He is the leading candidate for the 2016 NFL MVP award and a lock for the Pro Football Hall of Fame. But in 2004, he was — to quote former teammate Alan Faneca — “some little kid just out of college.”

Roethlisberger was the Steelers’ No. 1 pick from Miami, Ohio, in 2004 and took over as their starting quarterback after Tommy Maddox’s elbow injury in Baltimore in the second game. Backup Charlie Batch was out for the season. Many of the team’s veteran players thought the season was doomed. Faneca wasn’t afraid to hint at it publicly when asked if it was exciting to play with a hotshot rookie quarterback. “Exciting? No, it’s not exciting. Do you want to go to work with some little kid just out of college?”

Roethlisberger was aware of Faneca’s comments and aware of his teammates’ disappointment in losing Maddox. “The nerves were definitely going. The pressure…”

That was just one part of the backdrop of Roethlisberger’s first start. Kickoff was moved from 1 to 8:30 p.m. because of the hurricane. “It was the rainiest day that I’ve ever experienced,” Roethlisberger said on his weekly radio show on 93.7 The Fan. “The dirt on the baseball infield was a muddy mess. I remember any time they could, the grounds crew came out with that kitty litter or sand or whatever it is that they put down. It kept getting thicker and thicker. It’s your first NFL start, you have the weather, you have every element against you.”

So what does Roethlisberger, who wanted so badly to impress Faneca, his other teammates and coach Bill Cowher, do? He threw an interception to cornerback Patrick Surtain on his first pass.

That was against Michigan in 2001. Roethlisberger broke his nose in that game but quickly forget about that pain. He couldn’t forget about the interception as easily.

“Unfortunately, it was intercepted by [future Steelers teammate] Larry Foote,” Roethlisberger said. “I never heard the end of that.” 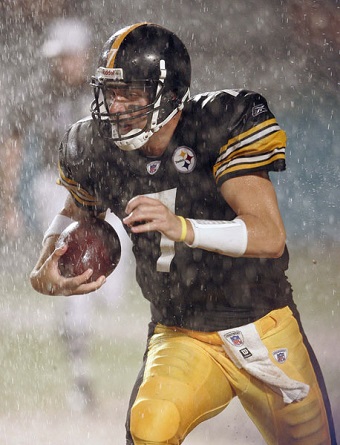 The game in Miami ended better for Roethlisberger than it started. With the Steelers leading, 6-3, in the fourth quarter, he completed an 18-yard pass to Plaxico Burress on third-and-12 and a 20-yard pass to Hines Ward on third-and-4.

He then threw a 7-yard touchdown pass to Ward, who made a diving catch at the pylon. That iced the Steelers’ 13-3 win, stunning the Dolphins, who were coached by former Pitt man Dave Wannstedt.

Who knew, as the torrential rain fell that night, that Roethlisberger would become the first rookie quarterback in NFL history to start his career 13-0? Or that he would go on to take a 117-57 regular-season record as a starter into Sunday’s game? Or that he would lead the Steelers to two Super Bowl wins and an appearance in a third?

“Wow. I’d be lying if I said yes, I knew,” Roethlisberger said. “I’ve been very blessed in this career to play this long and to stay healthy and to get a lot of wins. It means a lot to me to get wins because it’s for the Rooneys, my teammates and the fans.”