“Ben Roethlisberger understands the balance between excitement and business as usual.” 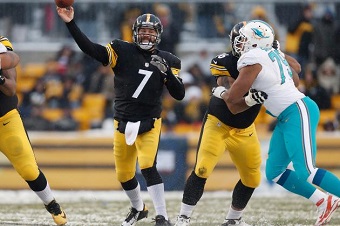 Ben Roethlisberger is no stranger to playing football this time of year, preparing for his 18th postseason game when the Steelers take on the Miami Dolphins in an AFC Wild Card game on Sunday at Heinz Field.

If there is one thing Roethlisberger has learned over the years, it’s how to approach the game. Yes, there will be a little more excitement, the blood will be pumping a little harder and the heart rate will pick up a bit.

At the same time, though, the key is tempering the enthusiasm and going into the game with the same approach you do each and every week.

“If you are not excited to be in the playoffs, something is wrong with you,” said Roethlisberger. “You still have to take the same approach. Today is Wednesday, let’s go about our business. I think just the attention to detail has to be a little more intense.

“You have to go about your business as usual, but you have to understand there is a sense of urgency, attention to detail, mistakes are magnified this week. It’s a little of both.

“You are excited, you do have jitters. There are only so many teams playing. A lot of teams have already gone home. I have been doing this for a while. Just keep eye on the younger guys and make sure they don’t get too excited.”

A player who doesn’t have Roethlisberger’s wealth of postseason experience is Le’Veon Bell, who was injured for the team’s last two playoff runs.

“I think he will be excited, I think that is good,” said Roethlisberger. “Any time you get the chance to play in your first playoff game, you should be excited.”

It’s been a while since the Steelers’ have had a full complement of players going into a postseason game, with Bell, Antonio Brown and DeAngelo Williams among those that missed time last year. Roethlisberger likes the fact that the health of the team isn’t an issue. 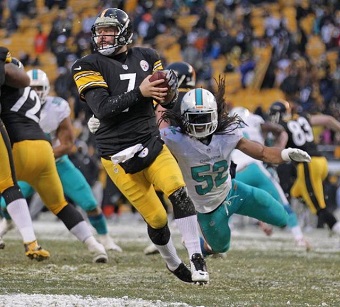 On the difference in the Dolphins defense since the two teams met Week 6 of the season:

“Very similar in terms of schematic things and issues.

Obviously they have some injuries, some different players.

They still get after the passer, try and stop the run. Their front seven, especially their defensive line, is exceptional.”

“He is one of the best defensive linemen in the game so you have to be aware of where he is. I will let the boys up front deal with where he is going to be. That is what they do best, blocking guys. I am excited for the matchup, I know they are excited because they love the challenge. This defensive line and linebackers present an awesome challenge for our guys up front. They are preparing for it.”


On if you dwell on the loss to the Dolphins earlier this year:

“We definitely spent a lot of time looking at it and we will look at it this week. You have to learn from it, learn from your mistakes. We understand that was a while ago. They are a different team and so are we.”


On the play of Eli Rogers:

“I think I was on record early in training camp saying he was going to be my breakout player that no one knows about. I am so excited he has been able to do those things. I think every week you see new stuff from him. You don’t see the same mistakes. You see a guy that learns from his mistakes and you see a guy that really is passionate about wanting to be great and he puts the hard work in to do that.”