With the 11th pick in the NFL Draft, the Pittsburgh Steelers select…

Home/News/With the 11th pick in the NFL Draft, the Pittsburgh Steelers select…
Previous Next

With the 11th pick in the NFL Draft, the Pittsburgh Steelers select… 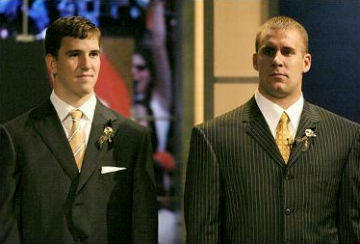 At 11:20PM: Ben and four others – Eli Manning, Roy Williams, Robert Gallery, and Kellen Winslow Jr. – are introduced to the crowd.

• 12:25PM: NFL commissioner Paul Tagliabue announces that the San Diego Chargers have selected Eli Manning with the No. 1 pick. Eli emerges from stage right and is greeted by unwelcoming chants by the Chargers fans in attendance.

• 12:58PM: NFL commissioner Paul Tagliabue announces that the New York Giants have selected NC State quarterback Philip Rivers with the No. 4 pick. Soon thereafter the trade with the Chargers is announced – Eli Manning is headed to New York, Philip Rivers to San Diego. Both fan bases seem pleased with the outcome….as Ben waits for his turn.

• 1:57PM: Pittsburgh is on the clock. “We see Ben Roethlisberger on the phone,” ESPN announces for the television audience. Sure enough, it’s Steelers coach Bill Cowher calling to tell Ben the Steelers are going to select him with the No. 11 pick.

• 2:00PM: NFL commissioner Paul Tagliabue announces that Ben is indeed headed for Pittsburgh. Ben arrives on stage and dons a Steelers ballcap and holds up a Steelers jersey.

• 2:02PM: Just off stage, Ben does a press conference for television reporters and then disappears from the public room to do a few interviews with the Pittsburgh media.

• 2:48PM: After another media conference and a round of short one-on-one interviews that last until close to 3:30 p.m., Ben heads for the door – Steelers jersey still slung over his left shoulder. 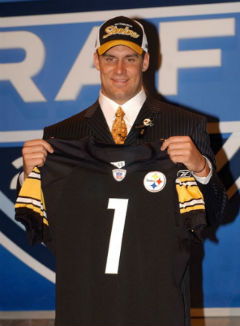 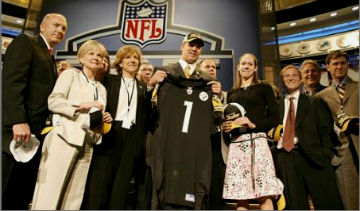 
(The above timeline was made from a combination of notes, television coverage, and highlights from Draft articles that are no longer available online)

And the day after….


“If one of those backs would have slid, we were not going to hesitate to grab him. It’s just like the quarterback position. We felt good about that, but Roethlisberger slid and we got him, and we bettered our football team.” — Former Steelers coach Bill Cowher, on selecting a quarterback over a running back – from an interview with the Pittsburgh Tribune-Review, April 26, 2004.

Winners -2, the Steelers were lucky enough to sit tight at No. 11 and still get the quarterback of the future that they so desperately craved. True, the Steelers would have rather had Rivers than Roethlisberger, believing the N.C. State star is more ready to play right away, but the stars still aligned in a nice way for Pittsburgh. Once upon a time, a team would draft a franchise quarterback prospect even if it had a quality starter on the roster. But not in the cap era, it’s too costly. So with the teams in the No. 5 through 10 slots all set at quarterback, the Steelers benefited from Roethlisberger’s tumble.

Now not everyone back then was on the Big Ben Welcome Wagon….


From Mike Prisuta’s column in the Pittsburgh Tribune-Review, the day after the Draft: 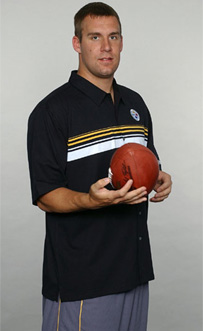